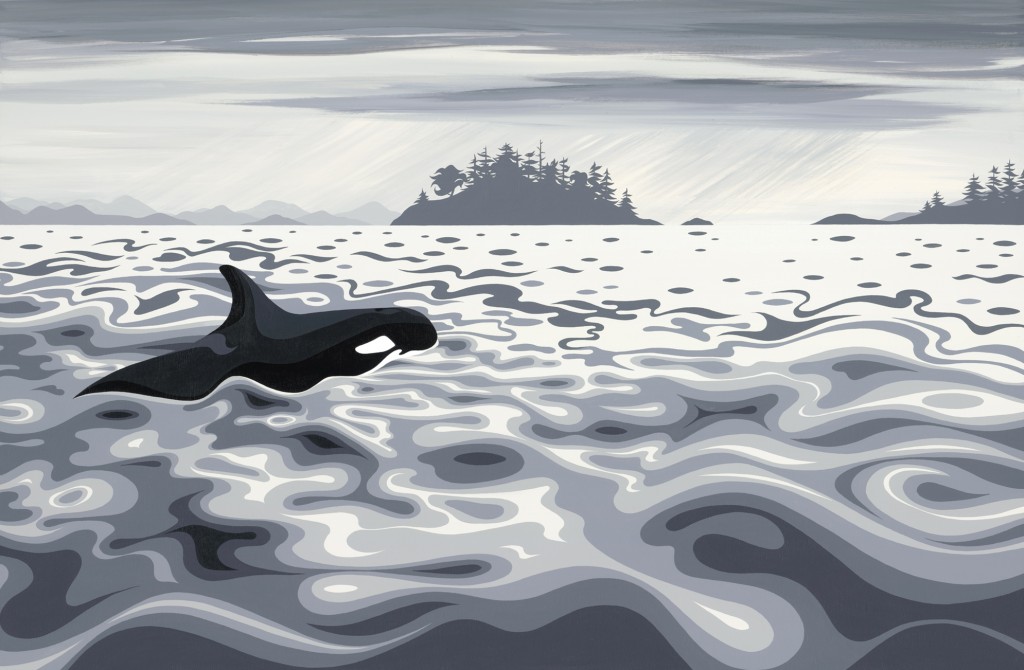 The seas are calm on this misty day of winter in the Pacific Northwest. The glassy waters reflect soothing shades of grey from the sky as clouds float in from the west. A light drizzle of rain refreshes the air. It silently passes by to become mist on the mountains of Howe Sound. It is on these days when the ocean is peaceful that the west coast reveals its true tranquility. The still waters offer a silence that is broken only by the distant call of a gull or splash of a seal. Floating peacefully, watching the mist move between the Pasley Islands, one is offered the opportunity to forget completely about the troubles of the world. 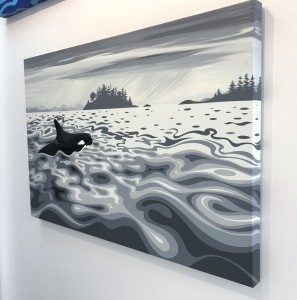 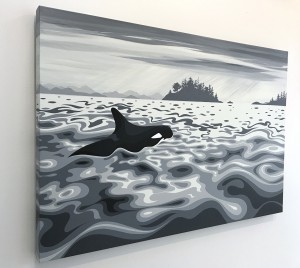 This peaceful scene was the perfect setting to memorialize Scarlet (J50), the young Southern Resident Killer Whale (SRKW) who passed away this September. Scarlet was born into J-Pod in 2015 and despite a seemingly healthy start, began to show signs of illness and stunted growth. In the summer of 2018 she appeared lethargic, emaciated and ate very little. Conservation groups from both Canada and the US mounted an international effort to save her, including administering antibiotic and de-worming medications as well as attempting to feed her salmon. In the middle of September Scarlet disappeared and the three SRKW groups formed a Superpod at Race Rocks off Victoria, leading many to believe they had come together to mourn her passing. 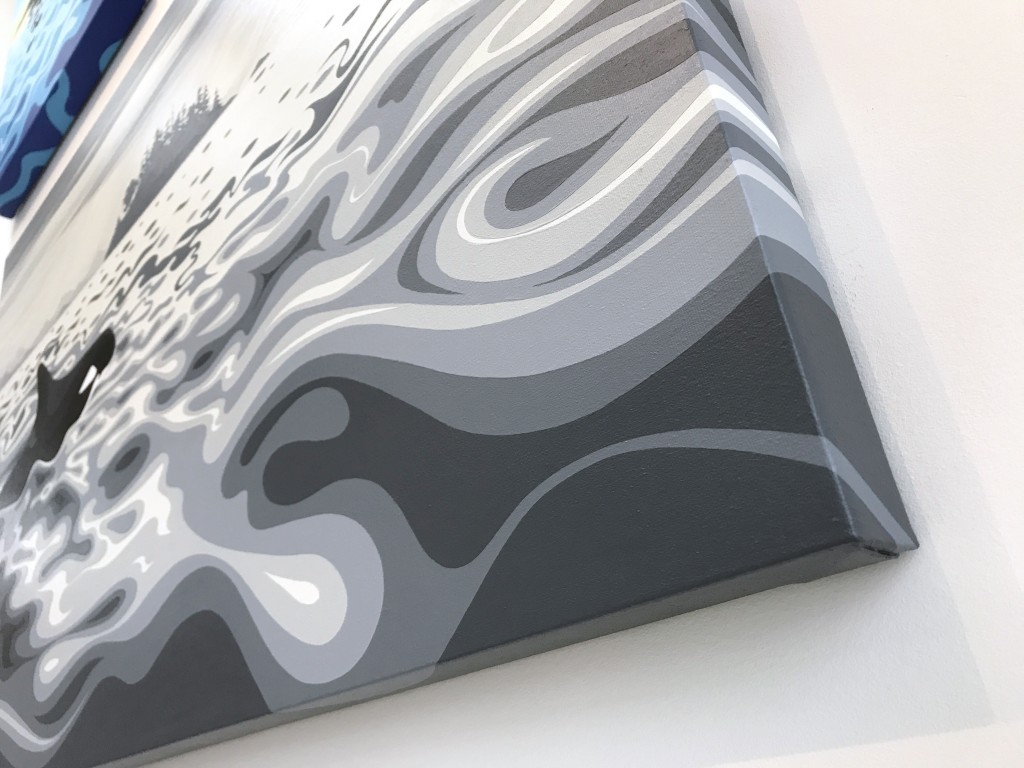 Scarlet’s story is a reflection of the dire situation the Southern Residents are in. With a dwindling population of only 74 individuals, these whales face extinction unless they can overcome the serious challenges presented by human encroachment into their waters. The Center for Whale Research cites difficulty catching Chinook salmon as the largest struggle they face, in part caused by an increasing amount of vessel traffic in the Salish Sea and subsequent noise interfering with their echolocation. Pollutants in the water (such as PCB’s and DDT) bio-accumulate in their body tissue making the Northwest Orca one of the most heavily contaminated marine mammals in the world. These chemicals have been identified as affecting the development of reproductive systems in dolphins and orcas, possibly explaining low birth rates in the SRKW population in recent years. (Source: https://en.wikipedia.org/wiki/Southern_resident_killer_whales) 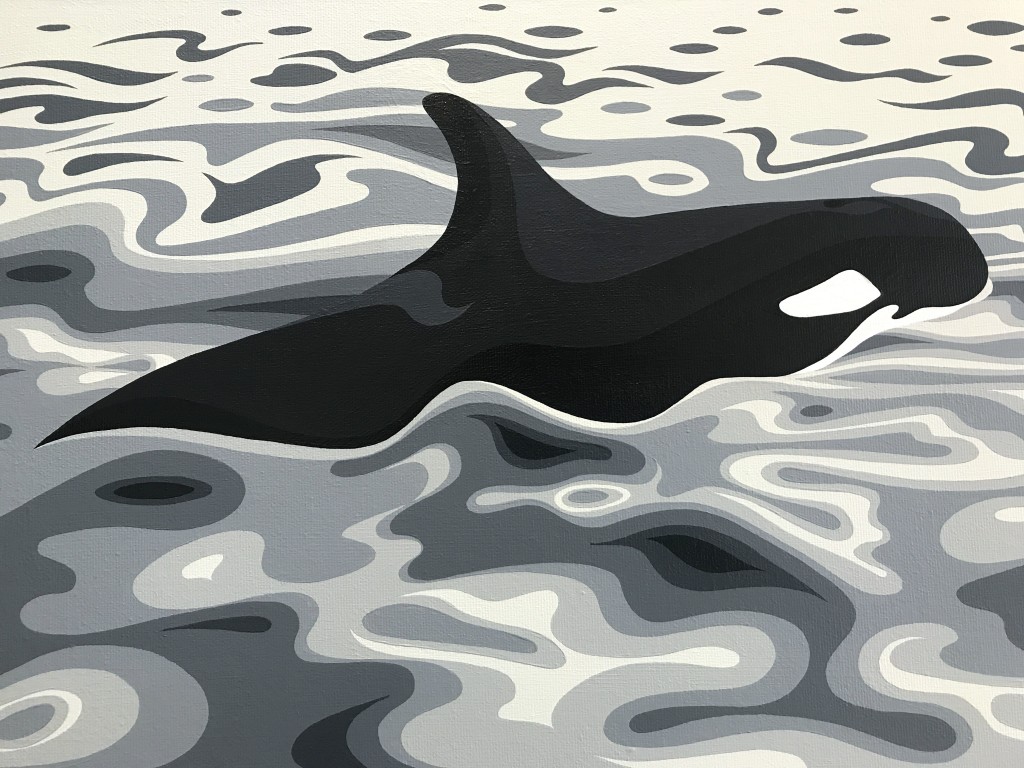 The Southern Resident Orcas need our attention now. We need drastic measures to ensure a healthy supply of Chinook salmon, provide quiet marine sanctuaries devoid of vessel traffic, and take a serious look at how chemicals are getting into our oceans and waterways. Scarlet has made her way into calmer waters, but the troubles her family face are far from over.

A portion of proceeds from the sale of this painting will be donated to The Center for Whale Research https://www.whaleresearch.com/