“Wild Art and the lonely mastodon on Bowen Island” 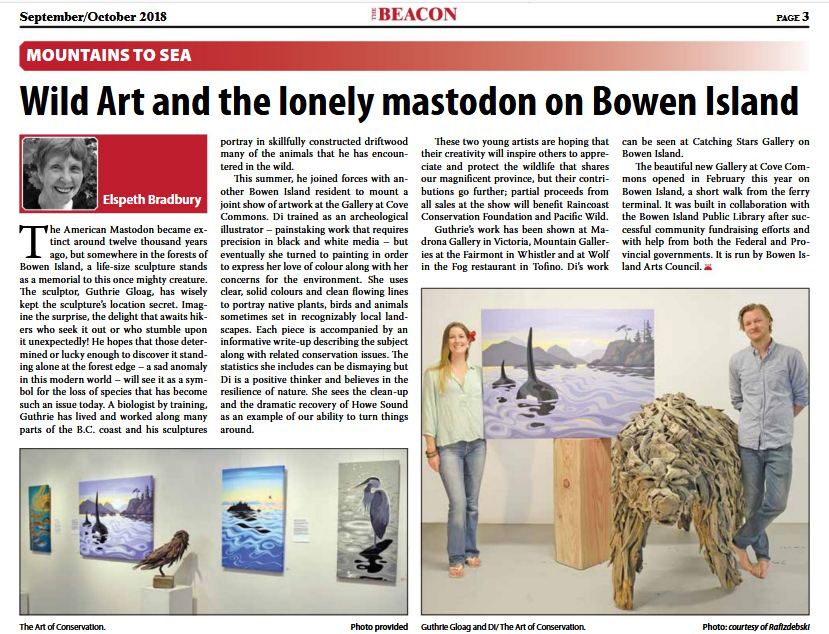 The American Mastodon became extinct around twelve thousand years ago, but somewhere in the forests of Bowen Island, a life-size sculpture stands as a memorial to this once mighty creature. The sculptor, Guthrie Gloag, has wisely kept the sculpture’s location secret. Imagine the surprise, the delight that awaits hikers who seek it out or who stumble upon it unexpectedly! He hopes that those determined or lucky enough to discover it standing alone at the forest edge – a sad anomaly in this modern world – will see it as a symbol for the loss of species that has become such an issue today. A biologist by training, Guthrie has lived and worked along many parts of the BC coast and his sculptures portray in skillfully constructed driftwood many of the animals that he has encountered in the wild.

This summer, he joined forces with another Bowen Island resident to mount a joint show of artwork at the Gallery at Cove Commons. Di trained as an archeological illustrator – painstaking work that requires precision in black and white media – but eventually she turned to painting in order to express her love of colour along with her concerns for the environment. She uses clear, solid colours and clean flowing lines to portray native plants, birds and animals sometimes set in recognizably local landscapes. Each piece is accompanied by informative write-ups describing the subject along with related conservation issues. The statistics she includes can be dismaying but Di is a positive thinker and believes in the resilience of nature. She sees the clean-up and the dramatic recovery of Howe Sound as an example of our ability to turn things around.

These two young artists are hoping that their creativity will inspire others to appreciate and protect the wildlife that shares our magnificent province, but their contributions go further; partial proceeds from all sales at the show will benefit Raincoast Conservation Foundation and Pacific Wild.

Guthrie’s work has been shown at Madrona Gallery in Victoria, Mountain Galleries at the Fairmont in Whistler and at Wolf in the Fog restaurant in Tofino. Di’s work can be seen at Catching Stars Gallery on Bowen Island.

The beautiful new Gallery at Cove Commons opened in February this year on Bowen Island, a short walk from the ferry terminal. It was built in collaboration with the library after successful community fund raising efforts and with help from both the Federal and Provincial governments. It is run by Bowen Island Arts Council.