The majestic Great Blue Heron is the largest heron species in North America and ranges along the Pacific Coast, from the regions of Prince William Sound in Alaska to Puget Sound in Washington State. Estimates suggest Canadian populations of nesting adult herons include about 4,000-5,000 individuals.

They live year-round on the BC coast and mostly breed in the Strait of Georgia, including on Bowen Island. During this time the herons gather in colonies for courtship between the monogamous couples, nesting and rearing their young in large platform-like stick nests usually built high in trees. Less than two chicks from an average of four eggs will fledge and less than 25 percent of juveniles survive their first winter.

The main predator of the species in British Columbia is the Bald Eagle however surveys conducted on bird colonies in BC suggest a significant decline in the species’ reproductive rate since the 1970s. Forested areas, which provide the herons nesting grounds, have declined due to urban growth. There has also been disturbance of nesting sites by logging operations and road construction. Recent destruction of heron habitat on British Columbia’s southern coast has led to 21 known colonies abandoning nesting sites. 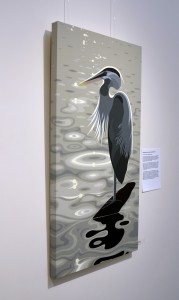