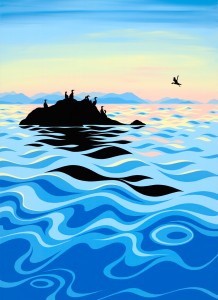 Calming blue waters at dusk, in the quiet colorful moments before the sun disappears entirely. Vancouver Island rests in the distance with her many mountains fading into the west. British Columbia’s rocky coastline is dotted by tiny islets that serve as a haven for seabirds like the Cormorants.

Phalacrocoracidae is a family of approximately 40 species of aquatic birds commonly known as cormorants and shags. The Pelagic Cormorant is the smallest and most abundant of the three species that breed along the British Columbia coast.

They can reach up to 80 oz and have a wing span of about 1 m. All species are fish-eaters, catching their prey by diving from the surface with some having been found to dive as deep as 45 metres! 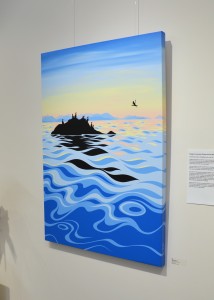 The centre of the species’ breeding in British Columbia is the Strait of Georgia and along the west coast of Vancouver Island. Nests are constructed on steep cliff faces, sometimes out of sight in large caves or crevasses, and on vegetated or rocky islands. Vulnerable to predation from Bald Eagles, Pelagic Cormorants often gain protection from eagles by nesting with Peregrine Falcons which aggressively defend their territories from the eagles.

Recent surveys during the breeding season suggest that the species has declined in the core of its British Columbia range. The Pelagic Cormorant is potentially vulnerable to oil spills, entanglement in fishing nets, and marine contaminants. 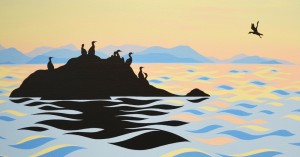