Kelp forests are classified as major habitats integral to the health of BC’s marine ecosystem and serve as the home for a large food web of fish and invertebrates. The Bullwhip kelp grows in cold ocean water from Northern California to Southern Alaska, usually in areas with strong currents in channels between islands.

The kelp reaches 30 meters in height and attaches to the seafloor with “roots” that act as a strong anchor in turbulent waters. The long stipes are topped with a hollow bulb which is filled with carbon monoxide for flotation. Long, wide fronds grow from the bulb up to 18 meters and serve as a home to various species of prawn, snails, brittle stars, sea stars, anemones, urchins, crabs, rockfish, sea lions, seals, migrating salmon, grey whales and sea otters. Sea otters help control urchin populations which can quickly decimate an entire kelp forest and are pointed to as the cause for kelp decline in Howe Sound. Gulls, terns, egrets, great blue herons, and cormorants also dine on the many fish and invertebrates living in the kelp.

Sockeye Salmon are among the most revered salmon species along the BC coast by both the commercial fishing industries and the First Nations peoples. Overfishing, freshwater stream disturbance and warming waters account for recent unpredictable fluctuations in runs. 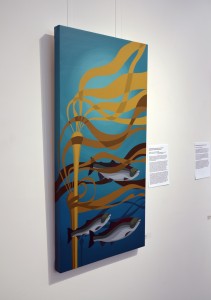 Wild populations of salmon are also increasingly threatened by commercial open net-cage salmon farms which are a breeding ground for pests and diseases such as Sea Lice, Piscine Orthoreovirus (PRV) and Heart and Skeletal Muscle Inflammation (HSMI). These are documented transmitting to wild fish populations and have a devastating impact on young salmon entering the ocean from nearby rivers. Many fish farmers also treat their fish with pesticides and antibiotics which when released into the ocean can harm shrimp, prawns and crabs. 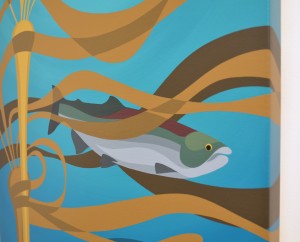